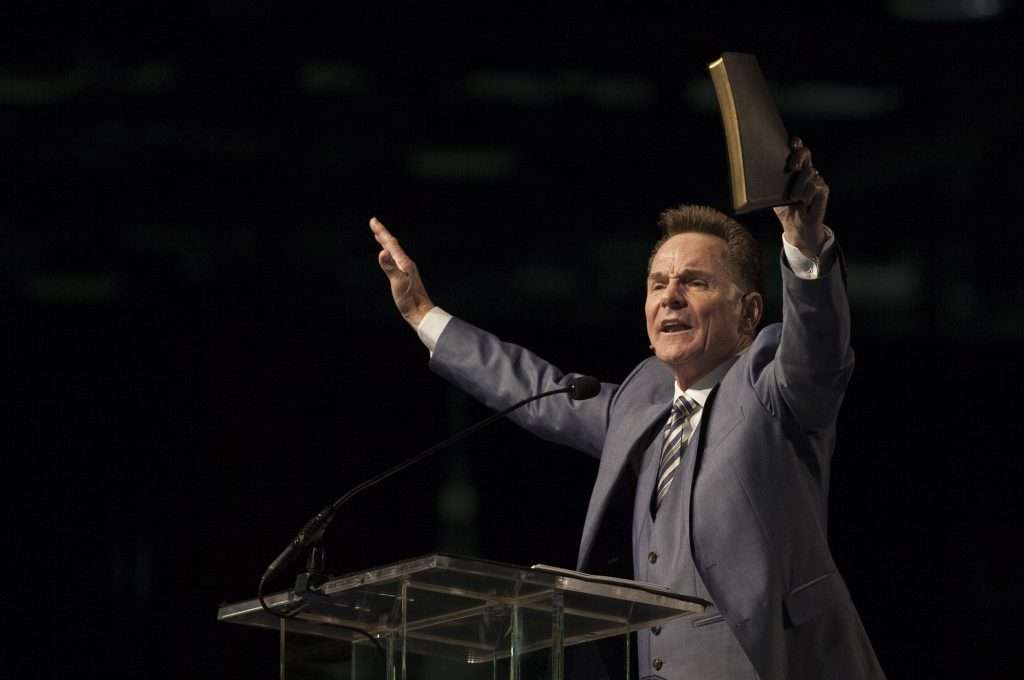 The full EC will consider Floyd’s nomination Tuesday, April 2, at a special called meeting in Dallas to begin at 11 a.m. Central at the Grand Hyatt at the Dallas-Fort Worth International Airport. A press conference and then a Facebook Live session at facebook.com/baptistpress will follow the EC meeting, which may end by approximately 3 p.m.

“Ronnie Floyd is a trusted voice of experienced leadership,” said Executive Committee chairman Mike Stone, an ex officio member of the search committee. “A lifetime of service in the local church and in virtually every layer of SBC life has uniquely prepared him for this critical hour. Dr. Floyd will be ready on day one to lead all Southern Baptists as president of the Executive Committee.” Search committee chairman Steve Swofford’s letter via email to EC members this morning (March 31) relaying Floyd’s nomination follows this story.

Cross Church has given nearly $11.5 million through the Cooperative Program during Floyd’s pastoral tenure, according to data from the SBC’s Annual Church Profile. CP is Southern Baptists’ unified method of funding missions and ministries in North America and throughout the world.

SBC President J.D. Greear, issuing an endorsement of the nominee, said, “Ronnie Floyd’s passion for prayer and spiritual awakening, combined with his strong support for our cooperative mission, his tireless energy, and his demonstrated commitment to raising up the next generation make him a unique gift to the SBC at this hour of transition.”

Ronnie Floyd, nominated as the next president of the SBC Executive Committee, is shown in this 2016 file photo holding his final news conference as president of the Southern Baptist Convention prior to the annual meeting in St. Louis. EC members will vote on Floyd’s nomination Tuesday (April 2). BP file photo.

Fifteen years later, he chaired the SBC’s Great Commission Task Force, which presented a series of recommendations affirmed by messengers in 2010 and aimed at increasing the convention’s evangelistic effectiveness. The GCTF recommendations led to EC recommendations, approved by messengers in 2011, that established Great Commission Giving, revised the North American Mission Board and International Mission Board ministry assignments and reduced the EC’s portion of CP funds from 3.40 percent to 2.99 percent. Great Commission Giving is a category encompassing CP as well as direct gifts to SBC entities, Baptist associations and state convention ministries.

As pastor of Cross Church since 1986, Floyd has led the congregation to give $1 million or more through CP annually since 2015, according to ACP data. “Only a few Southern Baptist churches in history” have given that amount, BP reported in 2015. The church’s average worship attendance increased from 1,800 in 1986 (when it was known as First Baptist Church of Springdale, Ark.) to more than 9,200 last year across several campuses.

Floyd serves on an informal evangelical advisory council for President Trump. Last year, Floyd said serving on the advisory council is not an endorsement of the president or his policies. Floyd also said he has had opportunity to express the Gospel to Trump.

He served as general editor of LifeWay Christian Resources’ Bible Studies for Life curriculum from 2013-2017 and has authored more than 20 books, including “How to Pray,” now in a 20th-anniversary edition. He is online at ronniefloyd.com.

Floyd holds both master of divinity and doctor of ministry degrees from Southwestern Baptist Theological Seminary in Fort Worth, Texas, and an undergraduate degree from Howard Payne University in Brownwood, Texas.

He and his wife Jeana of 42 years have two sons and seven grandchildren.

If elected, Floyd would be the EC’s seventh chief executive.

Among statements from members of the seven-person EC presidential search committee:

— Swofford, pastor of First Baptist Church in Rockwall, Texas, said, “I cannot express how happy we are that Dr. Ronnie Floyd is being presented as our next President/CEO of the Executive Committee! Every single thing that we felt was needed in the person who was to fill this all important role in Southern Baptist life is exemplified in Dr. Floyd. We believe that God has uniquely prepared him through his life, ministry and experience for this hour. We unanimously and excitedly present him to you!”

— Search committee vice chairman Adron Robinson, pastor of Hillcrest Baptist Church in Country Club Hills, Ill., said, “Dr. Ronnie Floyd is a proven leader with a vision to lead the Executive Committee in these turbulent times. He has the skillset to bring together the diverse leadership of our Convention to build a stronger SBC.”

— Joe Knott, an attorney in Raleigh, N.C., said, “I join my fellow committee members in enthusiastically recommending Ronnie Floyd to serve as president of the Executive Committee. He loves the SBC. His church is number three (3) of forty-seven thousand churches in CP giving. He has been chairman of the Executive Committee, president of the Convention, and is a mature man in his fifth decade of service. He is not uprooting and coming to the EC in order to go somewhere else. In my opinion, he is highly qualified and looks like the man God has uniquely prepared for this job.”

— Stephen Rummage, pastor of Quail Springs Baptist Church in Oklahoma City, said, “The better I have come to know Dr. Ronnie Floyd, the more I am impressed by his passion for reaching people with the Gospel and his vision for how Southern Baptists can work together strategically. God has gifted Dr. Floyd with exceptional ability as a leader, and he has served the Lord with distinction in every endeavor to which God has called him. I am convinced all Southern Baptists will benefit from the forward-thinking and trustworthy leadership Ronnie Floyd will provide as the next president of the SBC Executive Committee.”

— Rolland Slade, pastor of Meridian Baptist Church in El Cajon, Calif., said, “At this time in our Convention, we are at a crossroads — looking at our immediate need for leadership, yet envisioning a future in which our leadership is more diverse. There are few men who have the love for our Convention, wealth of knowledge, experience, and connections within and outside the Southern Baptist Convention as Ronnie Floyd. He is a rare leader who can offer the Executive Committee and the Southern Baptist Convention stability now and lead us into our envisioned future. I look forward to working with him as we move forward.”

— Carol Yarber, a retired medical administrator from Brownsboro, Texas, said, “My decision was based on prayer as well as Dr. Floyd’s proven leadership capabilities both in the SBC and beyond. He is anchored to the inerrancy of Scripture, commitment to prayer, and fasting. His character, integrity, and moral standings have been his way of life. He has the voice the SBC needs for today and our future.”

Below is the text of a letter emailed to Executive Committee members this morning (March 31) by search committee chairman Steve Swofford naming Arkansas pastor and former SBC president Ronnie Floyd as the nominee for Executive Committee president, to be considered during a special called meeting Tuesday, April 2, in Dallas.

Dear Members of the Executive Committee,

Your Presidential Search Committee is pleased to announce that Dr. Ronnie W. Floyd, pastor of Cross Church in northwest Arkansas since 1986, is our candidate for your consideration as the next president and chief executive officer of the SBC Executive Committee at the called Executive Committee meeting in Dallas, Texas, this Tuesday, April 2, 2019.

Ronnie is no stranger to any of us. He recently served two terms as our SBC president and is the current president of the National Day of Prayer Task Force. He has been a leader in racial reconciliation and has a stellar record of bringing together brothers and sisters from all generations, all races, and all walks of life to work in harmony for Kingdom purposes. We firmly believe he is the man God has uniquely prepared and gifted to lead our Executive Committee at this challenging time in our nation’s and our denomination’s history.

As you will see from his curriculum vitae in the Press Kit posted on the Executive Committee website (see here), our nominee has a breadth of local church leadership skills, Southern Baptist Convention leadership experiences, and leadership roles with numerous Kingdom initiatives that have prepared him for such a time as this. Our committee is uniformly and unanimously convinced he is the right man for the job.

In our many conversations with him, Dr. Floyd has communicated a clear and compelling vision about mobilizing and assisting the churches of the Convention in expanding the reach of the Gospel across our nation and around the world.

He is a personal soul-winner; and he equips others to launch out into the deep waters of lostness to become fishers of men.

He has a deep, personal prayer life; and he calls others to a passionate pursuit of prayer and holiness.

He has a proven track record of organizational and administrative effectiveness that we believe will serve us well as he seeks to lead our Executive Committee and our Convention in fulfilling the Great Commission.

Your search committee asks you to be in fervent prayer as we gather in Dallas to consider Dr. Ronnie Floyd as the next president and CEO of our Executive Committee. We pray the Lord will guide all of our hearts as we make this important Kingdom decision.