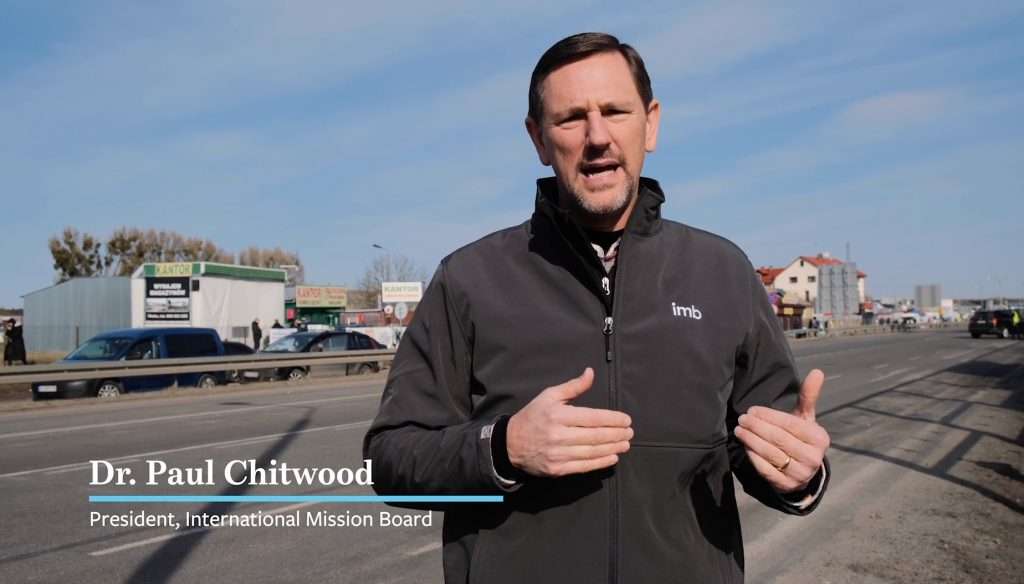 By BP Staff, originally posted by Baptist Press on March 2, 2022

In a video recorded on the border between Ukraine and Poland, Chitwood invited Southern Baptists to be a part of the ministry there, as Ukrainians stream into Poland seeking safety.

“We’re here to minister to them in any way we can,” Chitwood said in the video. “We’re grateful for the prayers and the financial support of Southern Baptists to make possible us sharing help and hope in the name of Christ with those who are now displaced and refugees from their own homes.”

Many IMB workers in Eastern Europe have been relocated out of the danger zone. But the ministry continues.

Chitwood visited with Ukrainian Baptist pastor and church planter Anatoliy Shmilikhovskyy, who brought his family out of Ukraine.

“I’m sorry for getting emotional,” he said in talking with Chitwood. “I wasn’t prepared for this in seminary.”

Baptists in Poland have sprung into action, with many churches housing refugees in their buildings.

The Polish Baptist Union initially hoped to house 500 refugees. It has since doubled that number to 1,000. Eight centers were designated to receive refugees, but Baptists increased the number to 40 camps located across Poland.

The United Nations puts the current number of Ukrainian refugees in the hundreds of thousands, but that number could rise to as many as 4 million.

As the conflict escalates, Send Relief and its partners are preparing for further ministry, including food relief, shelter and transportation.

“If you want to be a part of supporting this work,” Chitwood said, “please go to SendRelief.org, where you can donate and also find prayer points for you and for your church.”